We are glad that you are interested in our tours!


Our trekkings are designed to lead to unique destinations. Destinations that are not overcrowded. Which offer a special way to experience the magic of Bali.


Most of our guests didn't meet any other western tourists on our treks.


We don't want to play act our tour destinations as "secrets". As we publish them here, they can't be any longer. But they are certainly very special ones.

On the way to your trekking you are seated on the pillion seat of a Vespa.

But also on our Vespa tours, visitors are immersed in the world and lifestyle of the locals. You will have unique experiences.


We don't want to be hyperbolic. Many enthusiastic guests traveling with us attested that over again.

On tour you are seated on the pillion seat of a Vespa.

And our Vespa-tourings for experienced self-drivers will give you intense experiences of the tropical nature and everyday life of the locals.

Every single tour will be tailored according to your personal preferences. See our proposals as a building block system and feel free to contact us if you have any questions.

Maybe you get some inspiration by looking at our photos.

Would you like to become acquainted with certain arts and handicrafts?

Are you more up to landscapes?

Are special events in a natural setting for you especially interesting?

Do you want to ride one of our historic Vespas yourself - for example during our tourings??

Let us know what you imagine!

Is there a member in your group who won´t dare to ride on a motorbike? In this case we´ll surely find a solution, too.

Even in the best weeks of the year accidents can happen. We advise you to book a travel insurance of your choice, so all your activities are protected during your trip to Western standards. You can find one in "Other Offers" in the right hand menue. 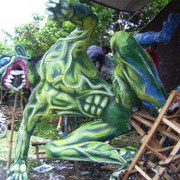 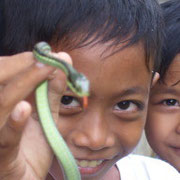 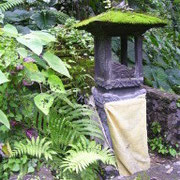 Streets in bali normally are cramped and really crowded. Traffic rules are replaced by a system of mutual attention. Thats very difficult for persons not used to it.

Heavy goods vehicle traffic, miscellaneous small and big busses of the public transportation system, private cars, thousands of motorbikes and more and more bicycles compete for the best position in the streets.

Actually left hand traffic is applied. It happens all the time anyhow, that in the assumed own lane other vehicles will come up in the opposite direction. In addition the roads are meeting point of the neighbourhood, playground for kids and romping place for chicken and dogs.

Europeans tend to describe the traffic in Bali as war. As we would rather spare you such an unfamiliar traffic situation, you will normally take place on the pillion seat or - if available - in a side car.

In our new base camp "Mangga Guesthouse" you can spend a comfortable night and it is very convenient to start all our tours from here, because you do not have to be picked up anywhere else. Just ask for special packages. MAIL

Two-Day-Tour for those who dare to ride a Vespa themselves:

Our most beautiful beach

bath and medidate at holy spring

How to bath in eucalyptus - it's not what you think...

New roundtrip around our new basecamp:

With us you can learn to cook it yourself!

As we are using rather old scooters, every single tour might be a bit of an adventure. There is always the chance of cracked bowden cables or other technical difficulties. These possible incidents are part of the historic scooter-scene. Take them as extra-events belonging to your personal Bali-Vespa-Tour.